The funds received per day were quite volatile with incentives, like a better fund raising meter and a blog on the importance donations resulting in interim spikes. The year end rally to get donations tax deducable in 2007 is also quite visible: 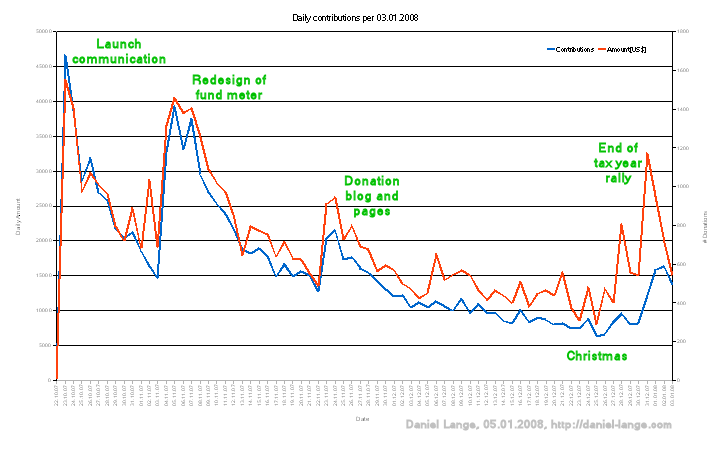 The above graph is also available as pdf for people wanting to do some further analysis.

The actual contributions have ranged from $0.01 up to $10,000 with twelve people donating $2,000 or more. There also has been one "matching type" donation scheme where an anonymous donor has doubled incoming donations (up to $50,000 - which were not reached AFAIK). 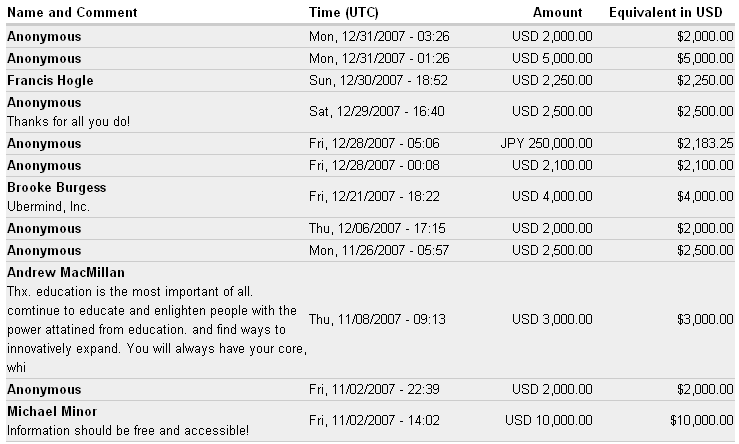 The average donation came in at $33.50. Actually while the total donations per day have been degrading over time, the individual donations that came later were higher than the earlier ones. You can see the average donation graphed in the Analysis II article or updated in this pdf. Obviously the year end (tax) rush has contributed to this fact as major individual contributions have quite some impact on the average. 50% of all contributions from $2,000 up have been received in between Christmas and New Year's Eve.

So, was it a success?

Yes, because some 40,000+ people have donated nearly $1.5m, a huge sum of money and the biggest and most successful fundraiser in the Internet ever. The Wikipedia is well supported by ten-thousands of individuals.

No, because the target that has been set (100,000 donors) has been missed by more than 56%.
A massive over-estimation of the amount of people willing to contribute. The intransparency of the fundraiser targets (only stated very implicitly, no financial targets given, see Fundraiser Analysis I) has done no good, neither has the public call by the Webcomics community to refrain from donating because of dubious notability deletions. The scandal that Wikimedia hired a convicted felon as COO without any background checks unearthed during the fundraiser has added further to Wikimedia losing credibility in the public opinion.

The unclear financial planning that totals $4.611m and was intended to change Wikimedia into a general charity operation seemed to be the major bummer though.

Thus it depends, because this general charity aproach as explained by Eric Möller:
"There are two paths the Foundation could take in its organizational development: 1) Focus, 100%, on hosting Wikipedia and generating enough funding to do so -- rely almost exclusively on ad hoc volunteerism for everything beyond hosting. 2) Build WMF into a mission-driven non-profit that is not merely hosting a website, but distributing knowledge to people world-wide, and reaching out to the global community for participation and content creation. These paths are extremely different. For example, in scenario 1), it would not be necessary to relocate the Foundation from St. Petersburg, Florida to San Francisco, as we've decided to do -- we would surely be able to support basic server hosting without it. On the other hand, becoming a successful and global charity requires access to a different talent pool, the ability to execute program directives, etc. As Jimmy's video should make clear, the Foundation (through its majority-elected Board of Trustees) has chosen path 2) -- we're not merely a webhost; we want to be a new kind of charity: a charity of free knowledge. And this necessitates that we prepare & plan our growth accordingly." (The Wikipedia Signpost, 2007-11-05, News and Notes)
is dead now. It's not supported by the community. No wealthy individual or major corporation has stepped up to take the burden.

So depending on your personal view of the best way forward for Wikimedia, this may be good or bad news. The topic is not through yet, as not everybody at Wikimedia shares the communities' opinion. The next "try" is to get a new Head of Business Development in and have him "identify and develop deals with for-profit companies" (Sue Gardner on the Wikimedia Foundation mailing list 03.01.08). The relocation to San Francisco has not been called off so far either BTW.

The aftermath within the Wikimedia foundation and - to some extent - in the Wikipedia community will bring other required changes to light. Eric Möller states:
"Obviously there are many things about this fundraiser that have been very broken[.]" (Erik Möller on the Wikimedia Foundation mailing list 21.12.07)

Both Mrs. Devouard and Mr. Möller have just resigned from their positions in the Wikimedia leadership circles though and we see glimpses of power struggles shine through:
"I do not share the same optimism than Jimbo with regards to Knol. I think Knol is probably our biggest threat since the creation of Wikipedia. I really mean the biggest. Maybe not so much the project itself, but the competition it will create, the PR consequences, the financial tsunami, the confusion in people minds (free as in free speech or as in free of charge). Many parties are trying to influence us, to buy us, and conflicts of interest are becoming the rule rather than the exception. There are power struggles on the path." (Florence Devouard on the Wikimedia Foundation mailing list 17.12.07)

This will stay interesting well into 2008. Thanks for reading.

07.01.08: From a thread in Wikipedia Review with "guy"'s and Greg Kohs' comments I've learned that the most successful internet fundraisers are happening in American Presidential election campaigns (e.g. John Kerry seems to have done $3m in one day of 2004). Thus the sentence under "Yes, because" above should really read: "most successful fundraiser for an Internet site ever". Thanks for the comments, folks!

Thank you for this critique, Daniel. I am increasingly convinced that the fish rots from the head down, and for the past 18 months, Jimmy Wales has not demonstrated to me that he has very much legitimacy to lead this project any more.

The fact that tens of thousands of accounts are blocked and banned from editing Wikipedia, the fact that the Board has commingled personnel with Wikia, Inc. without declaring it fully on the Form 990, the utter disparagement of critics... all tell me that the Wikipedia "mission" is not thriving.