The company got me a Chromebook for times when I want to ignore email and not get dragged into code reviews but still be available on IRC and chat. Nifty devices at great price points. I really like them.

These things are meant to be very consumer-style end-user devices. You log in with your Google account and everything works. Until it doesn't.

Just setting it up caused the first issue:

I was always thrown back to a black screen and then another login-screen despite having successfully logged in initially to create the "owner" user of the Chromebook. No error message, not useful UI feedback. Just logging in again and again and again.

The issue is ... not having a GMail account associated with my Google account. Duh! So add a GMail.com address as the primary to your Google account and the initial setup completes. Of course you cannot delete that GMail.com association again because the owner user is linked to the email and not the account. Well, you can delete it but then you cannot configure "owner" items of your Chromebook any more. Great job, Google. Not. Identity management 101 fail.

Kudos to Anurag Chawake for blogging about the issue. The Google support forum thead claims this is solved now. But it didn't work for me, so this may be needing to trickle down through ChromeOS releases or be deployed on more Google infra. Or whatever. We can't tell from outside the Googleplex as - of course - "Rebecca" sheds no light on what the identified "root cause" was: 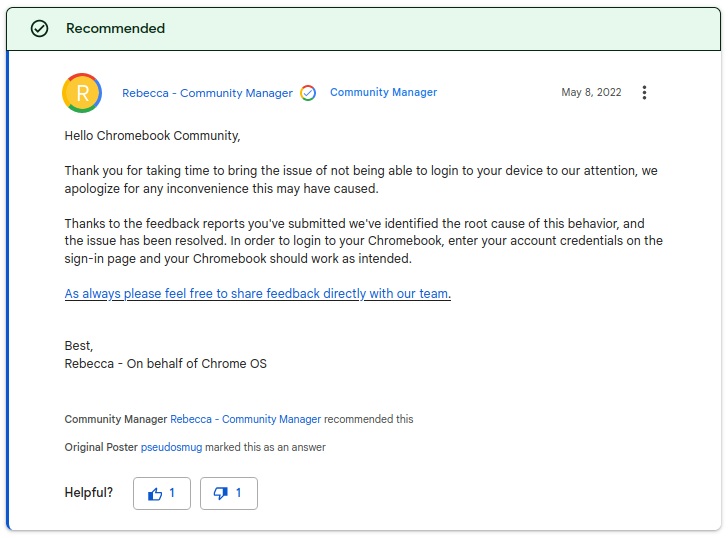 Once I was able to login to the new Chromebook all worked fine until I started to use ssh sessions. These always hung for 30 seconds to 10 minutes and then resumed with lots of packets lost in between and the last minute or so coming in from buffering in a burst.

This was easy to see in ping as well. The connection essentially dropped dead while the WiFi icon was continuing to show full signal strength. The logs did not show anything useful. These are really hard to access on ChromeOS (JSON format and no useful UI on the Chromebook itself, Google provides a viewer on Google Apps Toolbox but that requires uploading the logs). Better than no logs at all but not really nice.

The ChromeOS bug tracker and its Google corporate counterpart are also not useful at this time.

Playing around with the device on the network showed that it reduced sending power beyond being able to reach the access point any more. This is why disconnecting and re-connecting the WiFi fixes the issue for a few minutes, typically.

Still, there is a better way:

In crosh (the ChromeOS shell available when pressing Alt+Ctrl+T) type: 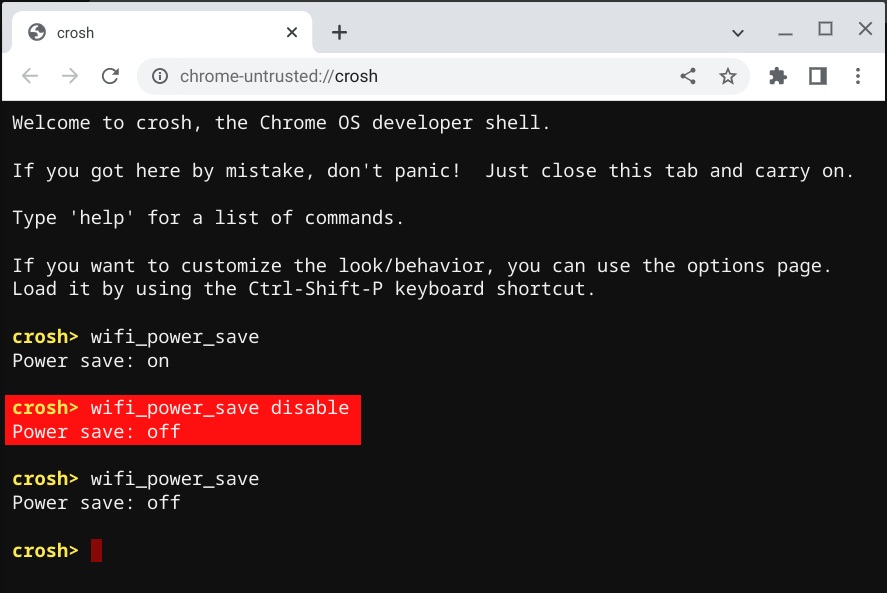 This unfortunately only lasts until the next reboot but it does persist over suspend cycles (aka closing the lid).