After installing RawTherapee, a raw photo to jpg image converter, on my Kubuntu 13.04 desktop, Mozilla Firefox started to open the Downloads directory in ... RawTherapee. Gosh. Now that's what you'd want to browse a downloads folder with.

Update-alternatives did not help as RawTherapee is not managed by the Debian alternatives system. Hm, xdg-open still works as intended and opens dolphin.

Asking Google turns up many not working solution proposals. Hm. 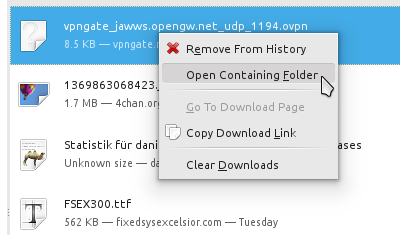 But, searching the collective memory is not completely useless. There is a solved bug report on the RawTherapee bug tracker that explains the issue. The .desktop file RawTherapee installs contains inode/directory as a supported mime type. Well, that's technically correct but makes no sense in the way mime associations are used. Thankfully the bug reporter was able to convince the developer of this and get this fixed for future RawTherapee releases.

So option 1: edit /usr/share/applications/rawtherapee.desktop and remove the inode/directory entry from the MimeType=-line. Then regenerate the various mimetype caches.

This still bears the question why Firefox does not use the inode/directory entry from dolphin.desktop. Also, the next update from Debian/Ubuntu will probably overwrite the fixed rawtherapee.desktop file again as the patch from the Rawtherapee developer will only be included on new releases (and these may or may not be backported to Debian/Ubuntu). So you'd need to copy that fixed rawtherapee.desktop file to ~/.local/share/applications/ or the like.

Option 2: find out what the real issue is...

Continue reading "Firefox opens directories in RawTherapee ... or a tale of colliding assumptions"