Until 22.12.07 Wikimedia has raised $1.267m from 39,474 people according to it's (well hidden) contribution summary webpage. That's even below the estimate, so we can conclude that the donations collected within the first two weeks, the estimation was based on, were above what was gained later. The contributors count has also had an important change that affected numbers: The Wikimedia foundation has decreased the number of people that donated below $1 through changing the donation webpages. It also does not account for people that still donate $0.01 to $0.99 through other donation mechanisms (e.g. by check) in their published account.

The donations mostly come from the United States (61%) and the Euro-Zone (22%). Honorable mentions go to the United Kingdom, Canada, Japan and Switzerland: (the graph displays the distribution of funds raised per originating currency, all figures from 22.10.-22.12.07) 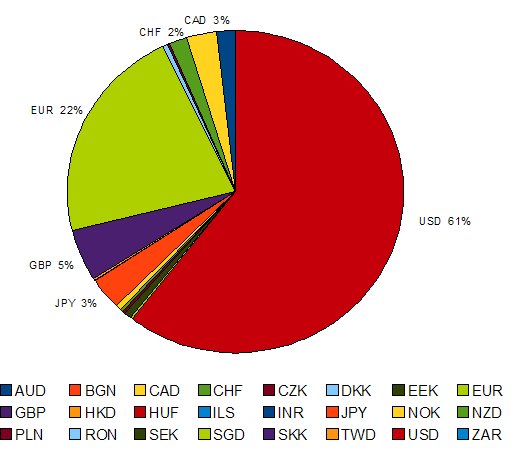 Plotting the fundraiser figures from the official webpage we see that the decline in total contributions per timespan is successively dampening the graph's increase. 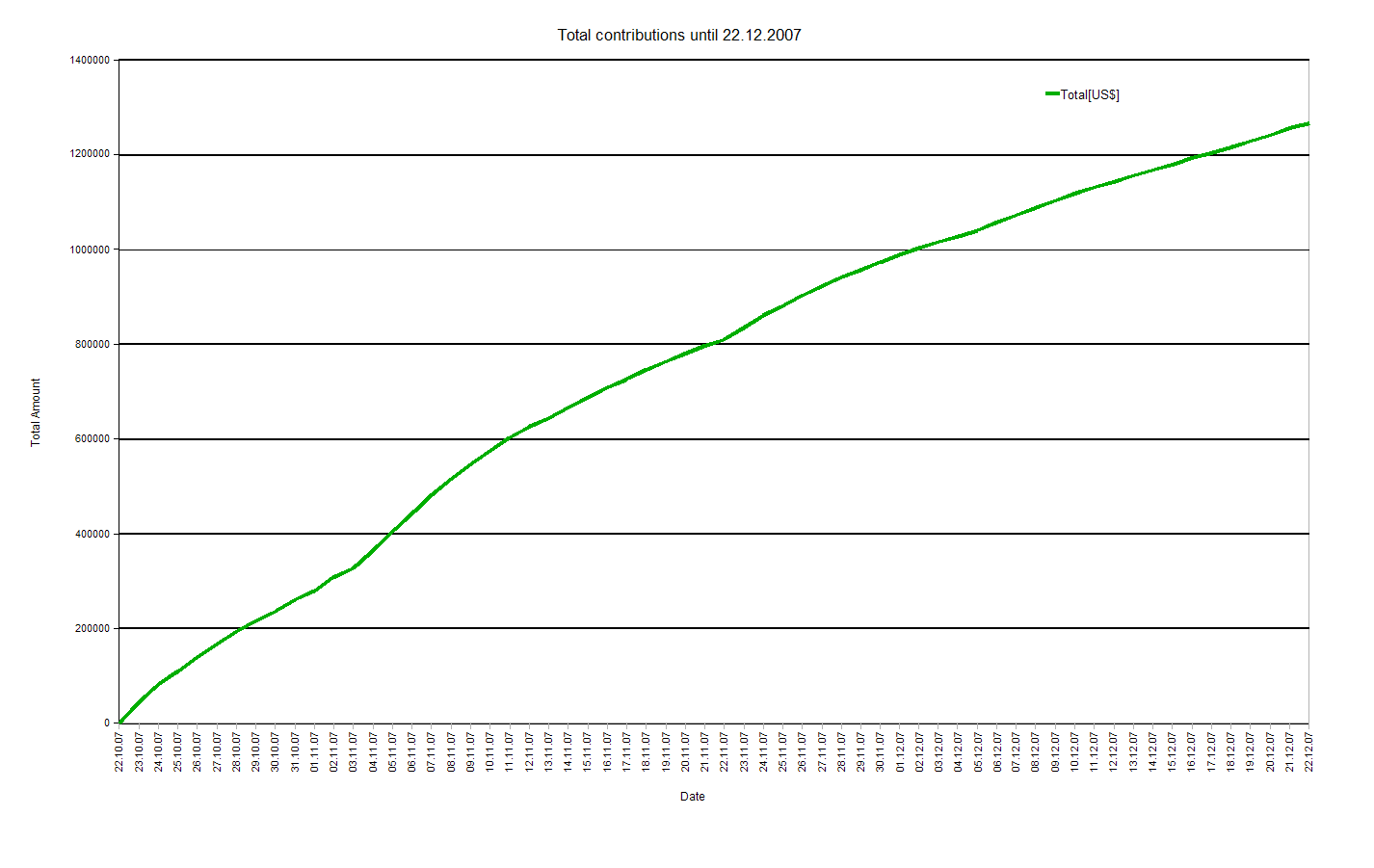 (click graph to enlarge in new tab or window)

This becomes more evident in looking at the daily contributions. We also see very interesting peaks, e.g. where large contributions were collected (e.g. $10,000 on 02.11.07 or $4,000 on 21.12.07) the red line peaks whereas the blue line, denoting the number of contributors, is unaffected. Both peak synchronously when the public attention gets newly focussed on the ongoing fundraiser. E.g. when the donation meter was redesigned and the campaign relaunched. Viral marketing doesn't work, tell everybody you know. 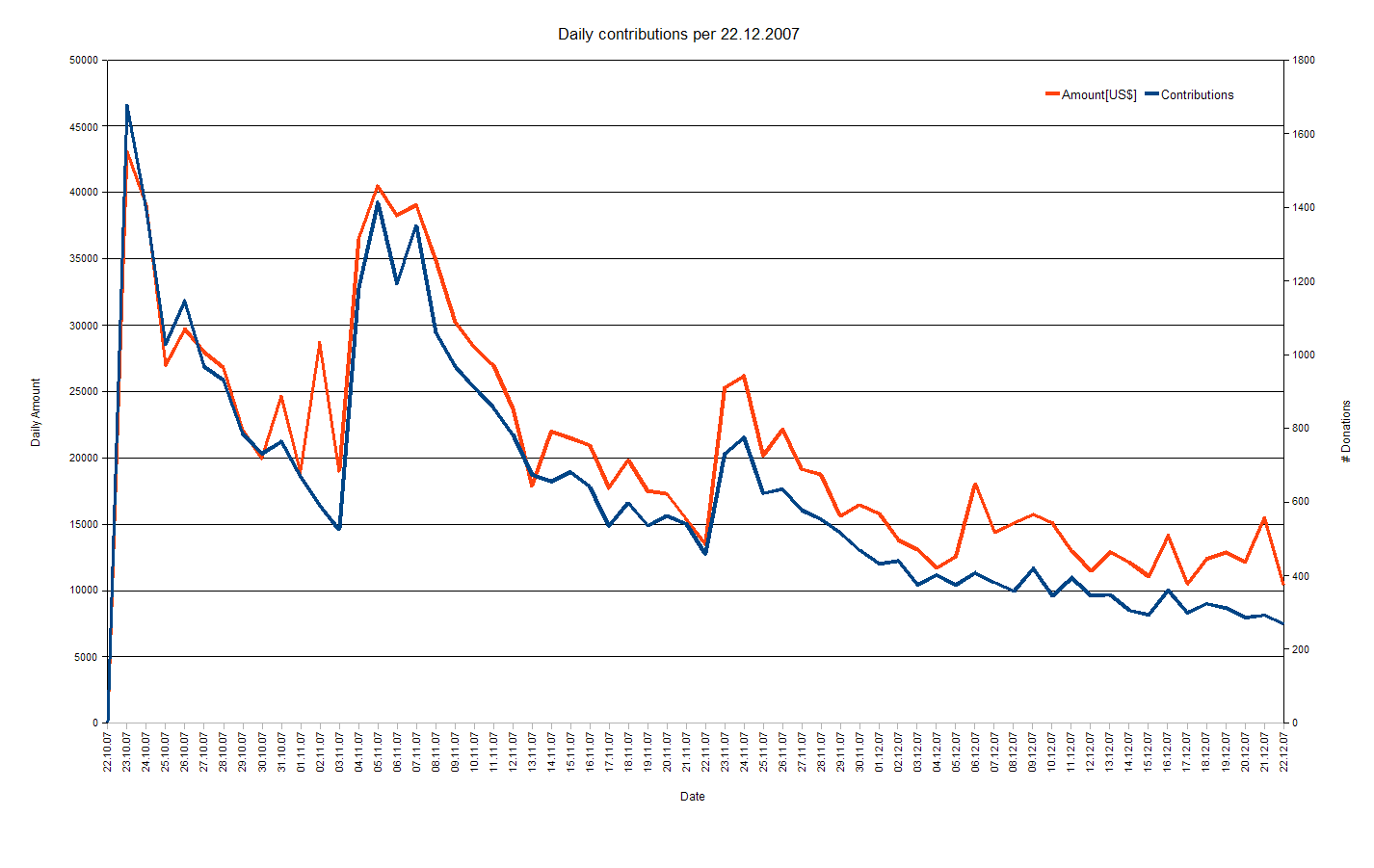 So while the total donations collected per day and the number of contributors per day both decline, the good news for Wikimedia is that the average donation is on the rise. While it was $27.85 within the first two weeks, it has climbed to $39.00 for the last two weeks. The average for the whole two months comes in at $32.10. So fewer people contribute but they have significantly deeper pockets now. 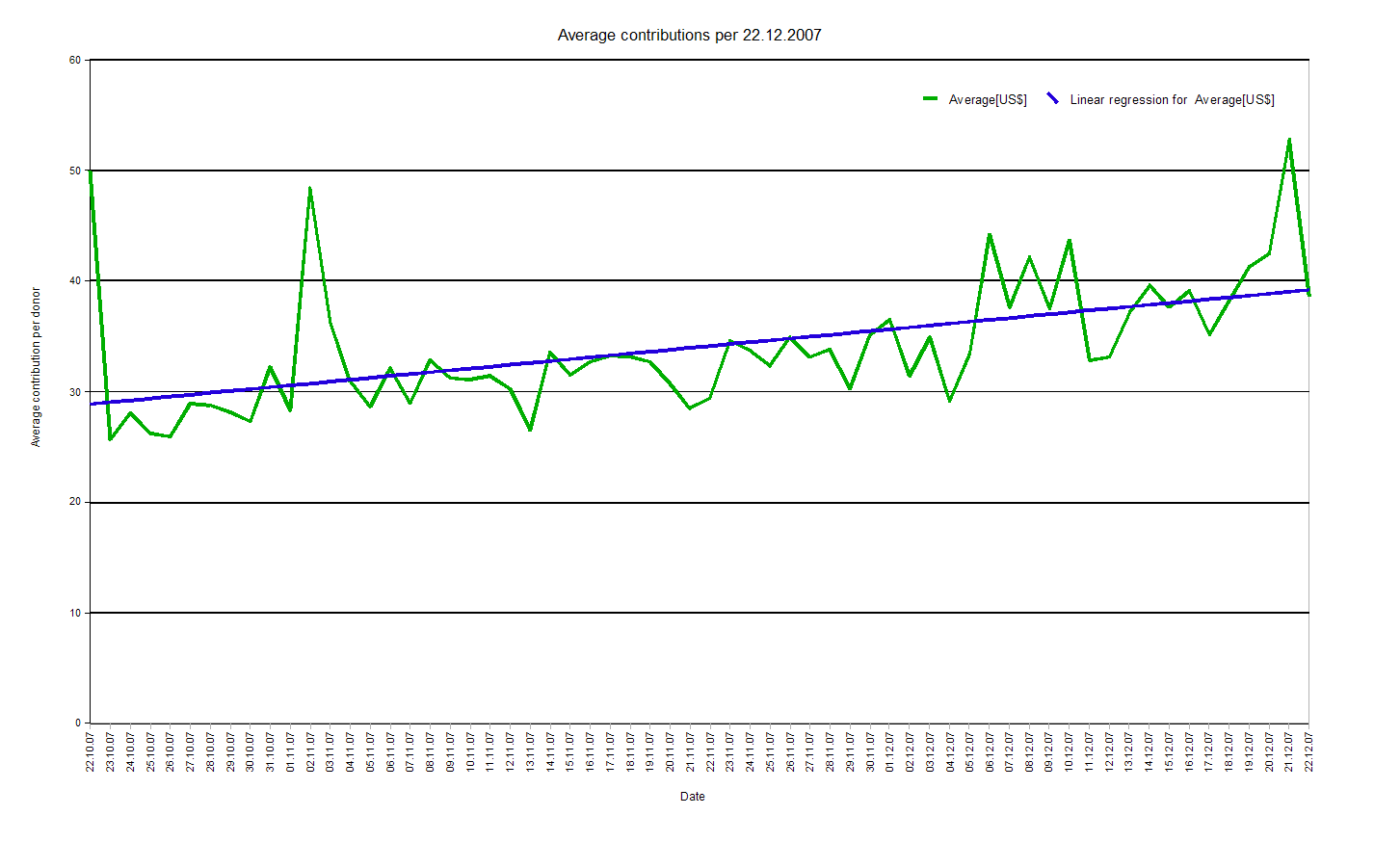 Which leads us to conclude once again: Wikimedia needs wealthy sponsors to donate $1m+ to reach even the funds planned for the operations (including HR expenses) of Wikipedia.org in the fiscal year 2007/2008.

There might to be something like that in the bushes according to the Talk:Fundraising_2007 page. Details are scare as always.

So to wrap this up, let's do the math (omitting the potentially large contributions coming in between Christmas and 03.01.2008):

Plus a few million from very wealthy individuals, perhaps, see above. That will have to decide whether Wikimedia foundation has to stick to it's roots and "just" continue to run Wikipedia - perhaps even with further hosting and bandwidth donations. Or whether it can launch a general charity programme including events, sponsorships and related activities in developing countries as planned for in the 2007/2008 budget.

The 100,000 donors goal cannot be achieved anymore. Estimating another 3,950 people will donate in the following two weeks, the total would come in around 43,500 on 03.01.08. So that measure of success wasn't a good idea either. We do not want to name $1.4m raised from 43,500 people a failure, do we? So: unrealistic goal-setting, too little transparancy. Please do better next time.