An overworked team with an impossible mission, to create a secure Internet browser, on Windows, is called to the weekly product team meeting.

Product Manager:
Team, you know that Edge needs to be the most secure browser on the planet, right?
So how can this thing segfault if some dude from the security consultancy fuzzes the Backup.dat?

You MUST make sure this is protected. It MUST be a violation of Windows Policy to modify the file. Go, make it happen! Report back next week!

Early next morning, at a set of tables in the middle of a dimly lit cube farm...

Developer:
Hey, team lead, do you know what the PM meant with "Windows Policy"? I never heard about a "Windows Policy". Is this the "Group Policy"? Or did he mean the product license? Like the shrink-wrap contract? Do we need to consult legal?

Team lead:
Oh, ffs, Bob. No time for discussion. The requirement is crystal clear. Implement it. You're the security lead. We have a deadline approaching.

Last year I bought the wonderful Dell XPS 13 9360 as it is certified to work with Ubuntu Linux and is just all around an awesome device. Dell made me buy the Windows version as only that got a 1 TB NVMe-SSD option. Linux apparently is only worthy of the 512GB and below models. What product manager comes up with such a stupid idea? Are SKUs that precious? Anyways ... so I bought a Windows version and that got wiped with a Linux install immediately as that was and is its intended purpose.

I purchased a DA200 with the system which is Dell's USB-C to anything (HDMI/VGA/Ethernet/USB 3.0) dongle. When I got the laptop the Ethernet port and USB 3.0 via the DA200 were working right out of the box. The VGA and HDMI ports were detected by Ubuntu but there was no way to get connected screens working. They stayed black.

The device was shipped with Thunderbolt firmware NVM18 and we've been told rather quickly by Dell this would be fixed with an update. And lo and behold Dell published the firmware version NVM21 right for Christmas 2016. Now unfortunately while their BIOS updates are Windows / DOS executables that can be just shoved at the Dell UEFI flash updater and thus the main BIOS can be updated from any OS, including Linux, without any hassle, the Intel provided Thunderbolt update needs Windows to get installed. Or, well, there is a convoluted way to compile an out-of-tree Linux kernel module, download and compile a few sets of software and do it via Linux. That description read so lengthy, I didn't even try it. Additionally there seems to have been no progress at all in getting this more mainline in the last three months, so I chose the cheap route and installed Windows 10 on a USB thumb drive1.

This is done via the (unfortunately Windows only) Win2USB software (the free version is sufficient).

Update: There's a new bash script windows2usb that looks good and should work to get you a bootable Windows USB thumb drive in Linux. WinUSB (that stopped working in the Win10 area some time) has also been forked and updated into WoeUSB. And there is WinToUSBLinux, yet another shell script. Give them a try.

Once Windows has rebooted often enough to finish its own installation, you can work with the USB thumb drive install as with any Windows 10. Nice.

Put all the files you downloaded from Dell to update your XPS 13 into a directory on the USB thumb drive. That way Windows does not need to have any network connectivity.

I first updated the TPM 1.2 firmware to a TPM 2.0 version (DellTpm2.0_Fw1.3.2.8_V1_64.exe at the time of writing this blog entry). Now this is quite hilarious as the Windows installer doesn't do anything but putting a UEFI firmware update into the EFI partition that runs on reboot. Duh. You do need to manually clear the TPM in the BIOS' security settings section (there's a clear checkbox) to be able to program new firmware onto it.

Reboot again (into Linux if you want to) and (drumroll) the VGA and HDMI ports are working. Awesome.

An update log can be found on the USB thumb drive at Dell\UpdatePackage\Log\Intel_TBT3_FW_UPDATE_NVM21_0THFT_A00_3.log:

If Windows has added its boot loader entry into your UEFI options, you can easily remove that again with the Dell UEFI BIOS or efibootmgr from within Linux.

The whole process took me less than 30 minutes. And most of that was creating the Windows USB thumb drive. I'll keep that for future updates until Intel and Dell have sorted out the Thunderbolt update process in Linux.

02.05.18: Added a link to the windows2usb bash script that should remove the need to create a bootable Windows USB thumb drive with a Windows only software.

11.06.18: Added a link to WoeUSB which is currently packaged for Ubuntu in a PPA.

08.04.20: Added a link to WinToUSBLinux. A recently released shell script to create a bootable Windows USB stick from Linux. 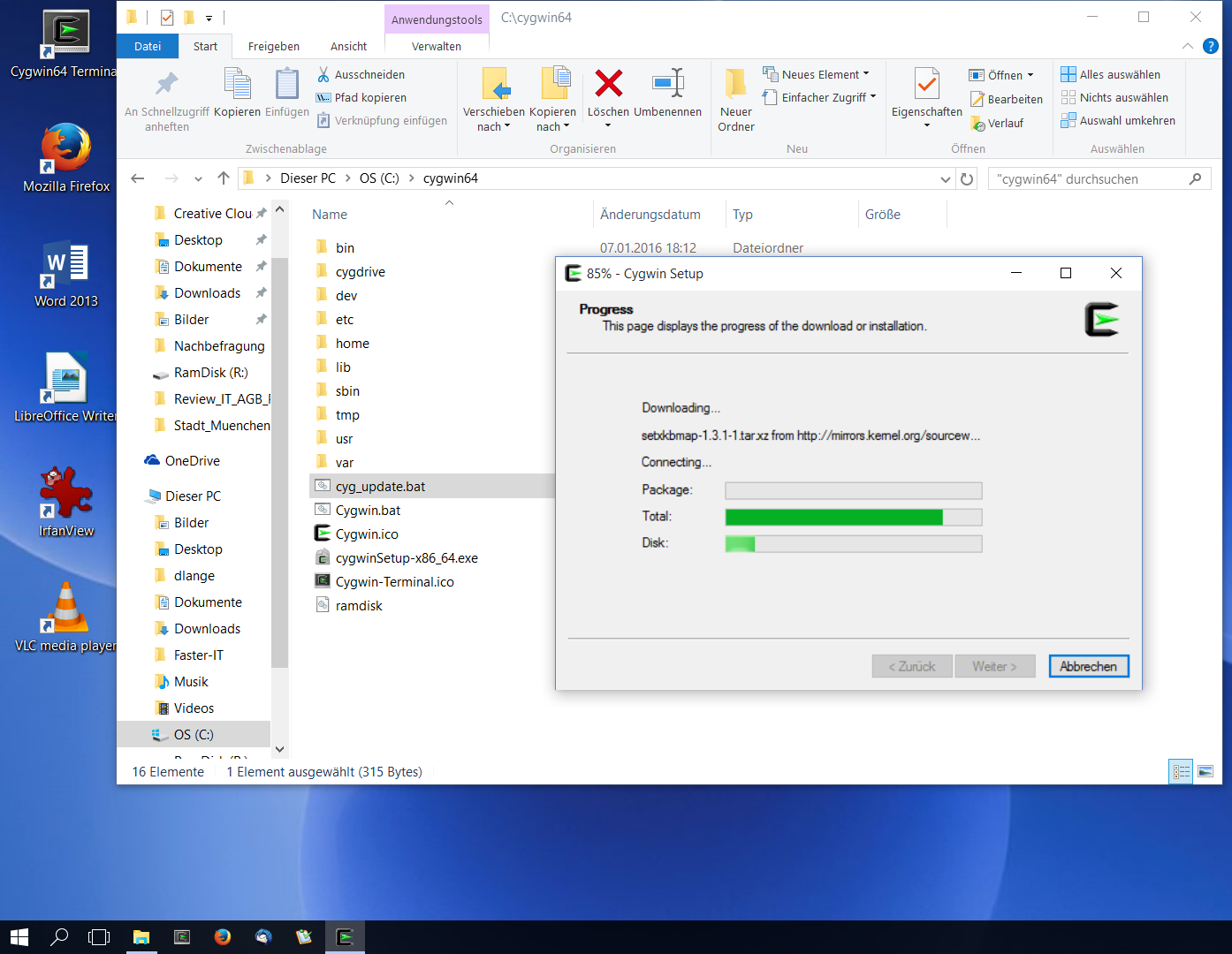 Every once in a while iTunes on Windows decides to start but does not show the main application window when trying to sync an iPhone (or any other iDevice).
May be it pops up after half an hour, may be not.

This behavior is caused by iTunes waiting for its Bonjour zeroconf network service. Unfortunately though iTunes is updated very frequently that bug is persistent for years now.
The work-around is easy though:

Open up CMD as Administrator and type

and iTunes should pop up its window a few moments later. It will complain about Bonjour not running but that is not needed for anything but network self-discovery. Which you usually don't need anyways.

If you do, you can start Bonjour again with

anytime also while iTunes is running. Once it decides to show its main window, it's fine to go for the session. 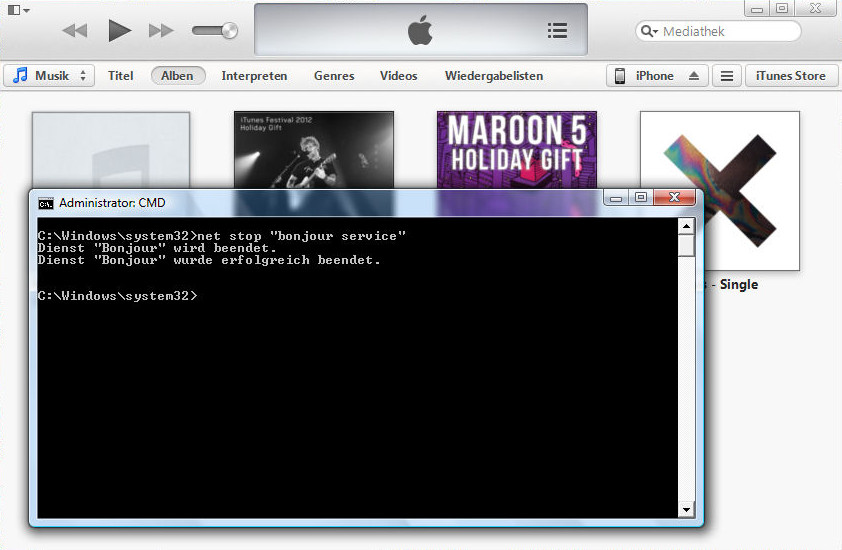 If you find that Microsoft Windows Vista is slow to establish a dial-up network connection (DUN) ("register with the network"), that may be caused by it trying to also get an IPv6 on a IPv4 only ISP. Remove the IPv6 protocol from the Properties -> Network tab of the DUN then. Worked for me on dialing into an ISP via Bluetooth / mobile phone. Ymmv.

I guess many people know the issue of having a screen saver forced active after a some time through a group policy in a corporate environment. This is usually done to make sure systems are locked during breaks if people forget to press Win+L (or Ctrl+Alt+Del and then Enter). While that may well help IT security, it turns problematic when giving presentations for extended periods of time. Having to move the mouse through the presentation pointer every few minutes or dash back to the PC once the screen saver has kicked in, again, is simply annoying. On your company's systems you may be able to get the system admins to allow configuration of the interval or allow for disabling the screen saver, but on foreign systems you're often lost. But...