But how much will they raise? What is the average donation (expected)?

The Wikimedia foundation does not give any indication. Nor does it provide any analysis on the fund raiser beyond the "meter" above. So DIY...

Well, we do have the recent contributions webpage. Twisting the "Filter" at the top of the page to not hide the donations below $5, we can get some nice look into how things are working out...

At 19:30 Central European time, there were 11,585 donations listed both in the meter and on the contributions web page. So that data is consistent.

There were 464 pages of donors(see Updates section below), so a friendly

and we have all 464 pages locally.

Now let's extract the lines with $ numbers in them:

And remove anything that's not the amount itself:

Now importing donations.txt as a column into OpenOffice Calc we get a nice set of data to analyse:

The distribution is very interesting though. The red bars indicate the number of donations within the given range. The blue bars display the cumulative total. 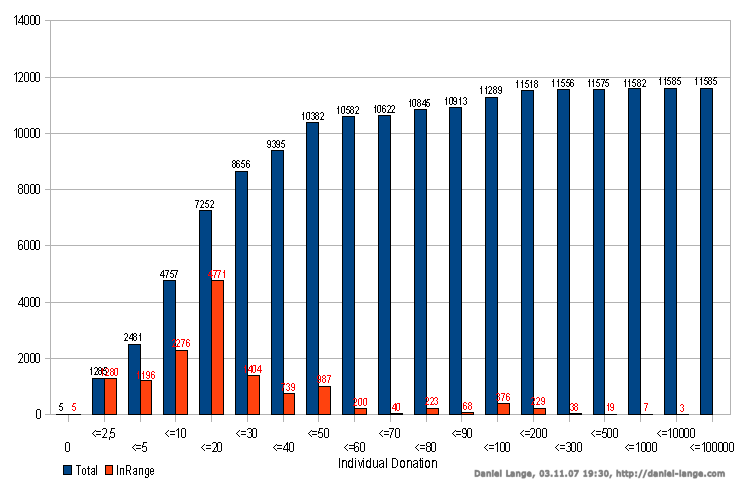 We currently see contributions coming it at $28,000 per day from just over 1,000 donors. As the fund raiser is set to run 60 days, the current estimation would be $1.68m to be raised from 60,500 people. So the target of 100,000 contributors is demanding even though the average donation is below Wikimedia foundation's suggestions.

Some random findings from analysing the data:

Anybody want to build a live version to analyse the Wikimedia fund raiser continuously?

04.11.07 14:28: Because Wikimedia changes the meter on its web pages, I have replaced the live version with a canned copy, so it does not vanish once Wikimedia does not need the old meter style anymore.