The Linux Foundation has published its annual report today. LWN calls it glossy and yeah, boy, it is shiny.

So shiny that people that work in the publishing industry immediately see this has been produced with the Adobe toolchain which - unfortunately - is one of the big suites of software not yet available for Linux.

Checking the PDF file metadata reveals the keywords "open source, open standards, open hardware, open data". That is what the Linux Foundation is about. Good stuff. 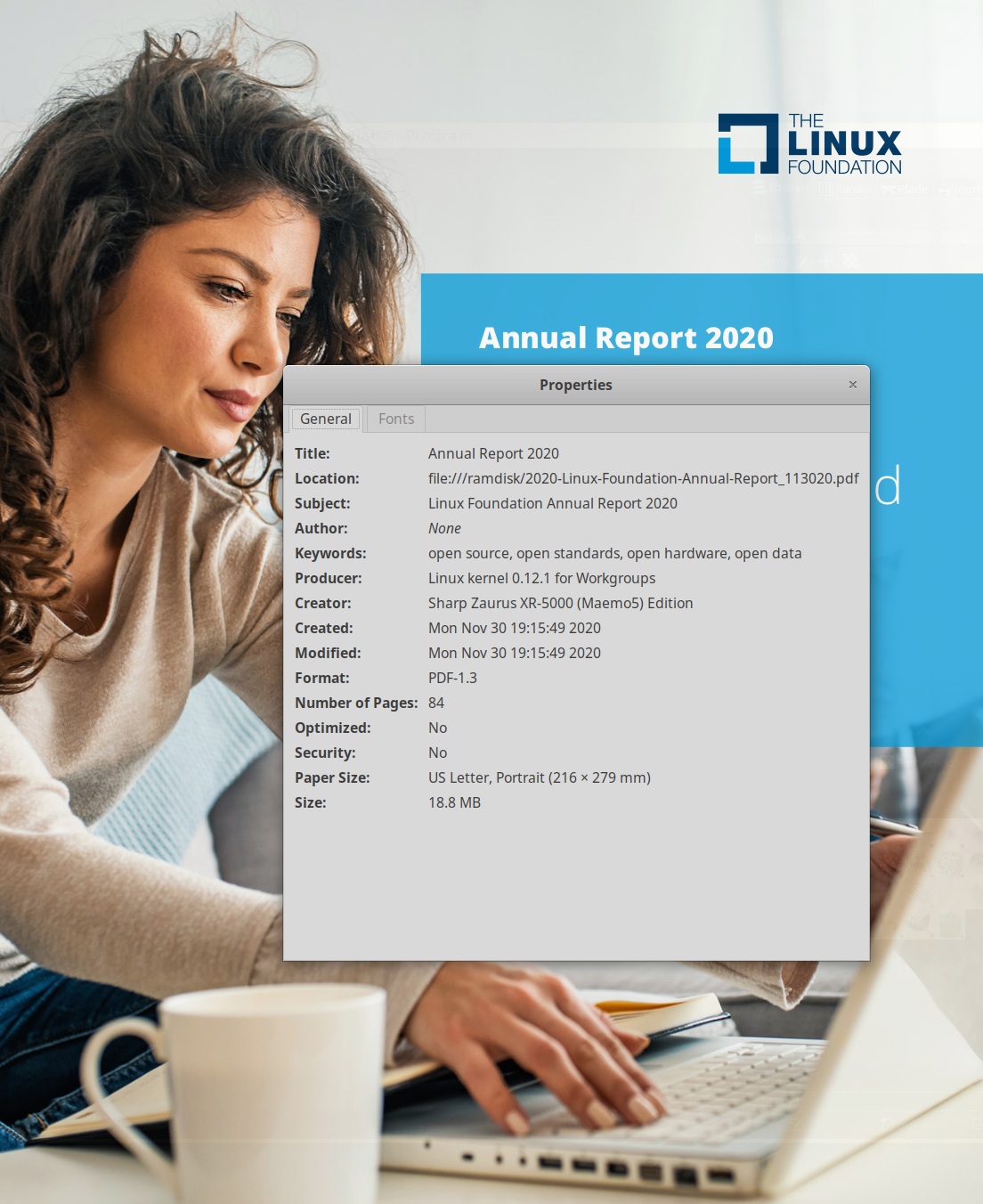 The PDF producer meta data for the annual report PDF has been set to "Linux kernel 0.12.1 for Workgroups" and the PDF creator meta data element to "Sharp Zaurus XR-5000 (Maemo5) Edition". Somebody thought to better hide the real data and had some tongue-in-cheek ideas. Kudos.

But nicer would have been to use Open Source software to produce the report, not?

So, ladies and gentlemen, the Linux Foundation 2020 annual report has been produced on a Mac.

Which is proprietary software. Its kernel (and some userland pieces) are based on BSD. Not Linux.

The image on the front page also struck me as a bit odd ... using a ballpoint pen on the laptop screen?

Kid in the background not paying attention to his tablet.

All of that cries stock image so loud it hurts.

Google currently finds ~560 uses of the picture and any editorial use nicely tells us that it is © Dragana Gordic / Shutterstock.

The image is "Smiling mom working at home with her child on the sofa while writing an email. Young woman working from home, while in quarantine isolation during the Covid-19 health crisis".

See the Daily Mail for a wonderful example of the working mum in context. I hope, if her laptop had been powered on, it would have run Linux. I mean, what else would still run on an old white MacBook with an Intel "Core 2 Duo" processor from 2008? 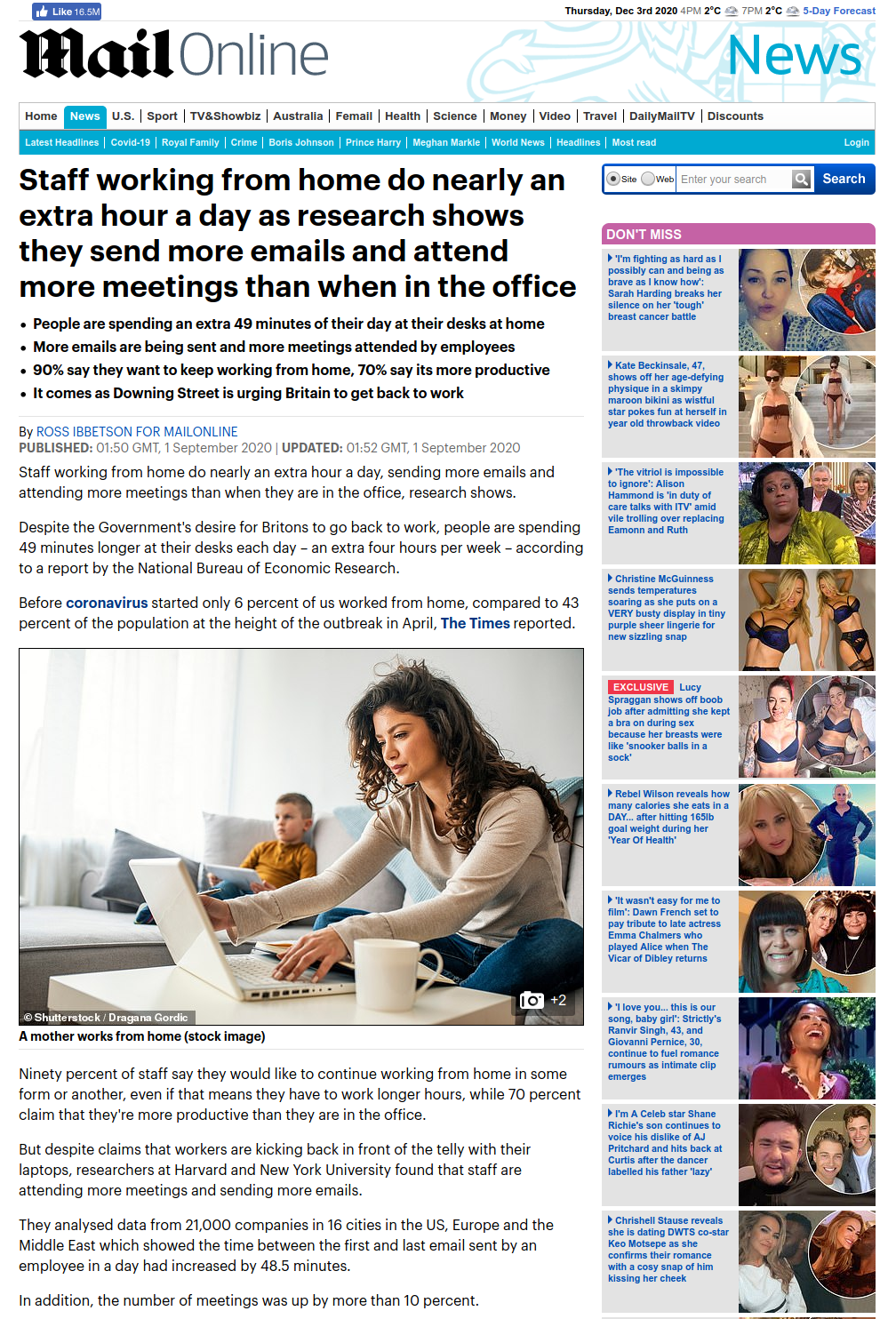 The Ethernet port, the USB ports and the headset connector are on the left side of the MacBook. The Daily Mail got it right.

Mirroring images is usually not a good idea. To Linux Foundation's defense ... similar pictures are available already mirrored on Shutterstuck next to the correctly oriented picture.

Unfortunately, the contents of this trackback can not be displayed.

This is hilarious. And totally sad. LF does not have one competent person in between the marketing people that compile such brochures and the management signing them off. Sad.

I stopped counting at 20 pictures of Apple Macbooks. That's what you get when you use stock images blindly.

Oh, and there is a single (Windows) laptop on page 19 (page 27 of the pdf) in the context of "Open Mainframe Cobol". A totally outdated Asus model. You cannot make such shit up.

FYI: The main section of the report was written in Microsoft Word before imported into InDesign. So there you have the other big non-Linux software suite, too.

Probably because it is so vapidly pretty that it could be selected as the cover image of a $148M foundation (annual budget, page 83).

Sounds like marketing tools just aren't a priority for Linux distros. That seems just right to me.

Or, even broader, may be Linux Foundation has given up on desktop use for Linux. They focus very much on embedded Linux and web apps if you browse through their member projects: https://www.linuxfoundation.org/projects/ .

Linus and Jim (Zemlin, the executive director of the Linux Foundation) seem to agree in viewing Android and Chromebooks as "the paths towards the desktop". (from https://itsfoss.com/desktop-linux-torvalds/)

Nothing new here, it's been known for years Jim Zemling, while peddling Linux (even on the desktop) actually loves using macOS: