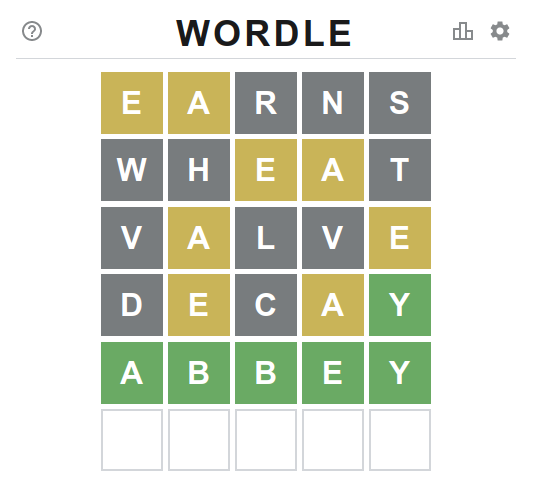 24.01.2022: What I love about the community is the playful creativity that inspires a game like Wordle and that in turn inspires others to create fun tools around it:

Robert Reichel has reverse engineered the Wordle application, so in case you want to play tomorrow's word today .. you can. Or have that one guess "Genius" solution experience.

JP Fosterson created a Wordle helper that is very much the Python version of my grep-foo above. In case you play regularly and can use a hand.

And Tom Lockwood wrote a Wordle solver also in Python. He blogged about it and ... is pondering to rewrite things in Rust:

I’ve decided to explore Rust for this, and so far what was taking 1GB of RAM in Python is taking, literally 1MB in Rust!

Joey Rees-Hill put it well in The Death of Wordle:

Today’s Web is dominated by platforms. The average Web user will spend most of their time on large platforms such as Instagram, Facebook, Twitter, TikTok, Google Drive/Docs, YouTube, Netflix, Spotify, Gmail, and Google Calendar, along with sites operated by large publishers such as The New York Times or The Washington Post. [..]
The Web wasn’t always this way. I’m not old enough to remember this, but things weren’t always so centralized. Web users might run their own small website, and certainly would visit a good variety of smaller sites. With the increasing availability of internet access, the Web has become incredibly commercialized, with a handful of companies concentrating Web activity on their own properties.
Wordle was a small site that gained popularity despite not being part of a corporate platform. It was wonderful to see an independent site gain attention for being simple and fun. Wordle was refreshingly free of attention-manipulating dark patterns and pushy monetization. That’s why it’s a shame to see it absorbed, to inevitably become just another feature of one large media company’s portfolio.

It was fun while it lasted. Let's see what the next Wordle will be. This one has just been absorbed into the borg collective.