Back in 2009 I wrote about Google's GMail emerging as the dominant platform for email. It had 46% of all accounts I sampled from American bloggers for the Ph.D. thesis of a friend. Blogging was big back then

Now I wondered how things have changed over the last decade while I was working on another email related job. Having access to a list of 2.3 million email addresses from a rather similar (US-centric) demographic, let's do some math:

Google's GMail has 39% in that (much larger, but still non-scientific and skewed) sample. This is down from 46% in 2009. Microsoft, with its various email domains from Hotmail to Live.com has massively caught up from 10% to 35%. This is definitely also due to now focussing more on the strong Microsoft Office brands e.g. for Office 365 and Outlook.com. Yahoo, the #2 player back in 2009, is at 18%, still up from the 12% back then.

So Google plus Microsoft command nearly ¾ of all email addresses in that US-centric sample. Adding Yahoo into the equation leaves the accounts covered at >92%. Wow.

Email has essentially centralized onto three infrastructure providers and with this the neutrality advantage of open standards will probably erode. Interoperability is something two or three players can make or break for 90% of the user base within a single meeting in Sunnyvale.

Google is already trying their luck with "confidential email" which carry expiry dates and revokable reading rights for the recipient. So ... not really email anymore. More like Snapchat. Microsoft has been famous for their winmail.dat attachments and other negligence of email best practices. Yahoo is probably busy trying to develop a sustainable business model and trying to find cash that Marissa didn't spend so hopefully less risk of trying out misguided "innovations" in the email space from them.

There is virtually no use of the new TLDs for (real, user)1 email. Just a few hundreds of .info and .name. And very few that consider themselves .sexy or .guru and want to tell via their email TLD. 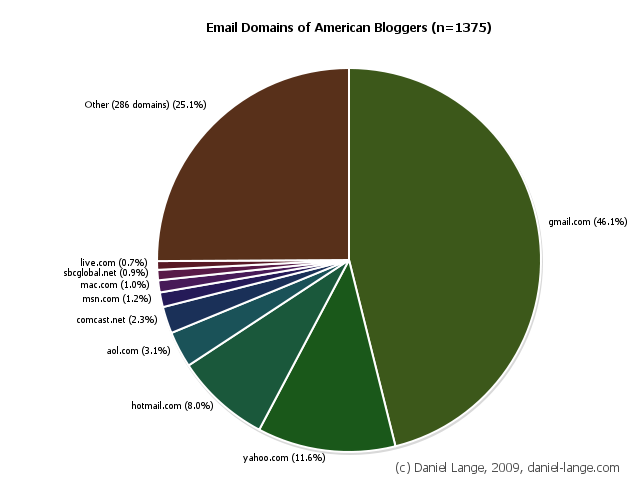