I use Xing to manage some of my business contacts and even some friends have profiles there as well.

The default size of contact's pictures displayed on one's Xing homepage is 18x24px. On a higher dpi screens, you can thus barely recognize the person shown. As there are multiple sizes of all images available, it's pretty easy to just take (for example) http://www.xing.com/img/users/d/f/1/f34814409.5648827_s1.jpg, remove the _s1 and see a 140x185px version of the picture.

Greasemonkey, a Firefox extension to run user specified scripts on selected pages that you visit, can automate this with a nice script from user louis to download here. Or my updated version here.* 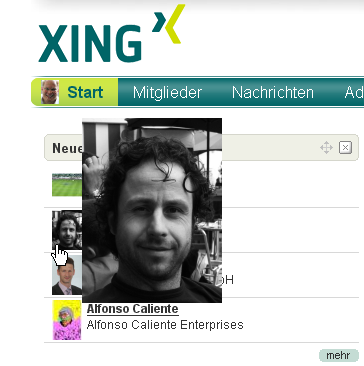 So, everytime I now hover my mouse over a tiny Xing thumbnail, it will show the "full resolution" version of the image. Simple, efficient.

* Xing changed it's image naming scheme a bit, so one needs an updated Greasemonkey script for all images to work again. Link inserted into the article text ("Or my updated version here.")

SSH with chroot patch has been working fine for a number of years. Since PAM v0.99 things have broken though, if users are chrooted with the "/home/username/./" syntax as their homedir.

Bugging the arch testers in #Gentoo-amd64 didn't help either:

I just learned yesterday again, what I knew a few years ago, but since had forgotten:

Apache cannot identify which VirtualHost to serve a request from because the payload is encrypted in its entirety. So a

header cannot be parsed until the encryption has been removed. Which requires the key, which is listed in the VHost section that could not be identified in the first place... So a name-based VirtualHost-configuration like this won't work:

It will just serve any request out of the first VirtualHost (serverone.tld) regardless of the hostname in the request headers.

There is some light at the end of this tunnel though: RFC4366 describes an optional field to the TLS (Transport Layer Security) client request called "Server Name Indication" (SNI). With this the client just includes a list of ServerNames (usually one) that it's trying to contact. Apache can easily match the supplied name from the client against a ServerName (or ServerAlias) directive from it's configuration files.

SNI will be supported with OpenSSL v0.9.9 in mod_ssl. Sometime in the future. There is a backport to v0.9.8 available from Steven Henson linked here. Or you can use mod_gnutls as described by George Notaras in a recent blog entry.

In either cases the above configuration snippet will "just work" once SNI is understood by Apache.

), Mozilla Firefox 2+, Opera 7.6+, KDE Konqueror 3.5+ support sending the SNI. You can test your browser at Kaspar Brand's SNI testpage. He also has a patch available to make Apache 2.2 mod_ssl SNI capable when compiled against a CVS-version of OpenSSL.

I'm rather sure that spreading SNI capable hosts will also provide new hacking opportunities: Let's assume a system serves both Intranet and Internet traffic. A client contacts the Internet IP with SSL but specifies the Intranet Hostname in it's TLS SNI entry. Guess what will happen? Yup.

SNI has made some slow progress since the original article. But major steps forward only came this summer: Apache has official support for SNI since 2.2.12 (tracking bug). Gentoo has been early to support SNI and Tobias Scheerbaum has written a blog entry on Apache, SSL und SNI in Gentoo (in German) summarizing how it works out of the box. Support for SNI has also been added to Debian (tracking bug) but for now the default config files don't reflect SNI capability yet. Ubuntu will see SNI in Karmic Koala, the release scheduled for next month i.e. "9.10" (tracking bug). Fedora has a SNI enabled Apache from httpd-2.2.13-1.fc11 onwards (tracking bug). Tobias also states that SP3 for Windows XP enables IE6 to send the SNI (SP2 is not sufficient).